Chelsea may now regret not snapping up Porto striker Rui Pedro when they had the chance.

As reported by O Jogo, Pedro had four training sessions at Cobham as part of a Chelsea trial.

But Chelsea chose not to keep him, and those in charge at the club were apparently told by his agent: “Save this boy’s name. You’ll be knocking on our door again.”

O Jogo claims that Rui Pedro, who turned 19 last month, continues being watched by English clubs, both when he plays for Porto’s first squad as for the reserves.

The youngster is receiving a lot of hype in Portugal, being Man of the Match in several Porto games which were watched by English scouts. In the UEFA Youth League, for example, he has seven goals in only six matches. 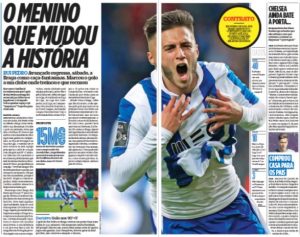 Last summer, he renewed his contract and now has a €30m release clause. His early success makes O Jogo wonder if the agent’s comments are being remembered by Chelsea more clearly.

However, had Rui Pedro joined Chelsea, he may not have made the progress he has.