During the summer, Birmingham City had Simeon Slavchev on trial at the club. The player spent a couple of weeks in Birmingham, and even took part in friendlies as manager Harry Redknapp was keeping an eye on him.

After the trial period, Slavchev ended up returning to Sporting CP, and didn’t stay at the club for much longer, as he was loaned out to Lechia Gdansk.

The midfielder has spoken to the Bulgarian press this weekend, and as the Portuguese media still keeps an eye on him, newspaper A Bola brought his quotes about the market situation he’s lived. 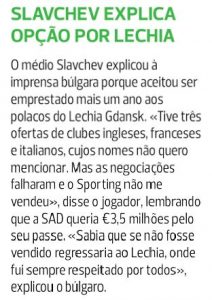 The player claimed he was wanted by many clubs, but couldn’t get a better move because of Sporting’s demands: “I had three offers from English, French and Italian clubs, whose names I don’t want to mention. But the negotiations failed and Sporting didn’t sell me.

“I knew that if I wasn’t sold I would return to Lechia, where I’ve always been respected by everyone.”

A Bola also reveals that Sporting were demanding €3.5m for the transfer. So despite the trial, even if Birmingham really liked the player, a decent fee would still be needed in order to get him.

That fee is a surprise, and it was probably a surprise to Birmingham City, and a large reason behind the potential transfer collapsing.