Benfica star João Félix has spoken to the Portuguese media this week, and his quotes have spread far and wide.

It’s not like he’s said something controversial, but the 19-year-old’s great form for the Eagles is making him the country’s big rising star, especially with his first call-up for the national team.

His success is obviously a reason for the transfer rumours to grow, and with the likes of Manchester United getting linked to the attacker every week, he was asked about the chance of moving in the summer.

“If I continue to work as I have done so far, the interest of these teams comes naturally,” João Félix told O Jogo and others, who reference Manchester United. 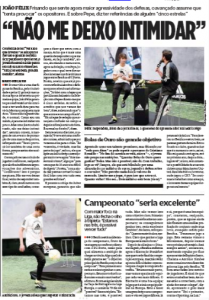 Regarding his €120m release clause, which is expected to be demanded by Benfica in case of a summer move, João Félix tried to say he’s not worth all that: “I don’t understand anything about market values. I just play, that’s what I’m here for. How much? I don’t know… Two million is good [laughs].”

But he doesn’t want this kind of comparison at this time: “It’s still early. By the end of my career, you’ll know.”