Monday was a public holiday in Spain and therefore it was a surprise when Alvaro Morata’s agent Juanma Lopez turned up at Sevilla’s offices for talks.

A potential move to the club had been rumoured for a while, but Lopez appears keen to push the move forward and get his client an exit from Stamford Bridge.

In their Tuesday edition, Marca report that Morata is very keen on a return to La Liga. He wants a club with aspirations to do well for the rest of the season and believes he’s found that in Sevilla.

There’s a couple of issues which mean the road won’t be so smooth, and one of those is inevitably money.

Marca say that on wages alone, signing Morata would cost the Spanish club €1m a month, which would likely mean them taking on all of his Chelsea’s wages, and doesn’t include a loan fee. 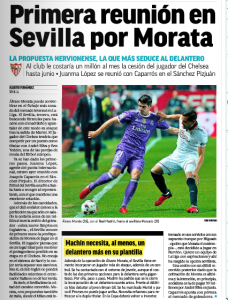 Should that hurdle be jumped, and it could involve the player taking a pay cut, then he wouldn’t have it so simple if Chelsea allowed the move.

Andre Silva and Ben Yedder have been doing well for Sevilla, so Morata would have to fight his way into the team.