Jadon Sancho and Manchester United has been simmering for a while.

Ahead of the summer window, and during it, Borussia Dortmund made it very clear they wouldn’t be selling the England international this year, and it sounded very much like they were looking to cash-in mid-2020 instead.

A that stage he’ll have two years left on his contract and if his improvement continues, or he even stays at the best level he’s shown so far, the Bundesliga club will surely be looking at more than €100m from Manchester United or anyone else.

This week’s edition of Kicker has a couple of articles which have snippets about a potential move to England, namely to Old Trafford.

They say it’s ‘speculated’ in the English media that Sancho could end up at Manchester United, but it’s been speculated everywhere… including Germany.

Kicker say it all depends at what point the BVB bosses ‘become weak’, and how much that costs. A potential fee is put at ‘€100m plus X’, and whilst it isn’t made clear what that means, the insinuati 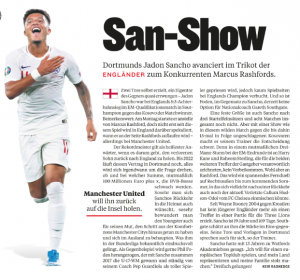 on would be it’s not going below that figure.

A separate article in the same magazine covers Dortmund interest in Bayer Leverkusen’s Kai Havertz. Marco Reus recently said he’d do everything he can to get the player to his club, and whilst BVB don’t want it spoken about publicly, Kicker say the club can’t simply stand back and let Bayern Munich swoop in.

The problem is, of course, money, and it’s assumed Bayer are looking at a minimum of €100m. Selling Sancho would provide ‘the cash’ and then Borussia Dortmund would have to decide whether to spend it all in one go, on someone like Havertz, or go for several players instead. 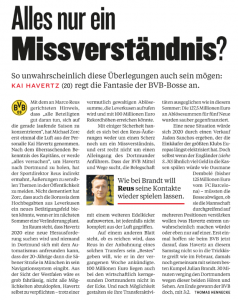 There’s no great leap forward on Jadon Sancho to Manchester United here, yet it’s interesting the way the potential exit is being viewed, and that ways of replacing him are already being suggested.