The Spanish media are engaged in something of a PR campaign detailing Ansu Fati’s commitment to Barcelona, and Premier League clubs are being dragged into the story to give it some added drama.

Mundo Deportivo today carries claims that Manchester City made tentative enquiries towards signing the youngster in the summer window, using Jorge Mendes presence in England, whilst he was sorting out Cristiano Ronaldo’s future, as an opportunity to try and get talks going.

Over at AS they use Manchester United, and it’s claimed the Red Devils offered €100m for Fati in the summer 2020 window, an offer which it’s stated was rejected by Barcelona.

That seems to be something of a stretch, Manchester United had no clear need for Fati, and an offer so large would have been hard for the Catalan club to turn their noses up at. 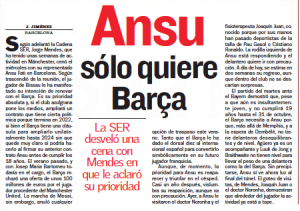 The stance of snubbing such a bid from the Old Trafford side helps build up the idea that Fati and his club are fully committed to each other, and make the story better for Blaugrana fans.

According to multiple reports, Fati is now on the verge of signing a new contract.