West Ham’s withdrawal from the William Carvalho negotiation is all over the Portuguese media today. The claims had a quick impact in the local news outlets, although each of them has a different take on the matter.

Some of them agree with Sky. Jornal de Notícias, for example, confirms that talks between the clubs are over after Sporting kept demanding €37m plus bonuses for the midfielder.

Meanwhile, O Jogo makes a pretty clear headline: É Bluff Ingles. West Ham have pretended to give up on the deal just to make Sporting change their demands.

That’s the same information A Bola has, as Sport Witness covered earlier on Saturday. They claim the feeling at Alvalade is that West Ham will not pull out, and a deal could still be reached before the end of the transfer market.

The reason for it is that Sporting are ready to sell the player, as they haven’t made any big transfers this window, and West Ham would have Carvalho as their only target.

So it’s claimed a deal could end up being made for €30m plus €5m in bonuses, something that would give West Ham a good deal in this endless tussle.

And Record doesn’t even mention the claims from England. 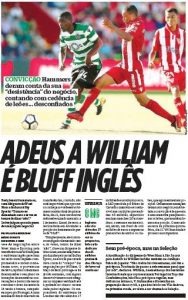 They say the talks have been stalled for a few days, but there’s still some expectations that a final €35m offer will be made in the next week, and with something between €5m and €10m in bonuses, that could be enough to convince Sporting.

They also claim that there are two other Premier League clubs willing to get involved in the situation, although it’s obvious this could be a bluff from Sporting to make West Ham hurry up.

Bluffs all over the place.