That’s how Gazzetta dello Sport open their article on the Argentine’s situation on Wednesday, as the Manchester United fans await his ‘yes’ to a move to Old Trafford with bated breath.

As first reported by the very same newspaper on Tuesday morning, before many of the big Twitter claims everyone seems to live off these days, it all rests on Paulo Dybala.

The very same Dybala who doesn’t actually have an agent, but don’t worry, there really was someone in London on Tuesday on his behalf, he’s just not an official agent.

Gazzetta touched upon it briefly yesterday before delving into more detail on Wednesday, explaining that since he parted ways with Pier Paolo Triulzi back in 2017, the Argentina international has let his brother, Mariano, deal with off the field stuff.

He’s also asked a family friend named Jorge Antun to manage the commercial aspect of his career, and that’s who was in London on Tuesday. 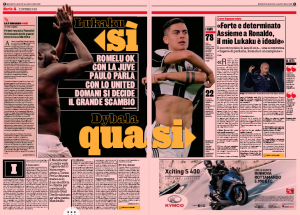 Despite this difference, Gazzetta remain very positive, stating the ‘ending seems already written’, with the ‘most probable’ outcome being Dybala signing for Manchester United.

He ‘hasn’t done it yet because he still isn’t convinced’, but that’s because he ‘didn’t really expect it’ to all come down to this.

Thursday is described as D-Day, as that’s when the Juventus forward is expected to land in Italy and have a talk with Maurizio Sarri and Fabio Paratici, which could end up scuppering the whole deal.

However, the Premier League club might have received some welcome help from Patrice Evra, as Gazzetta report Dybala received a phone call from the former France international recently, who has never hidden his love for Manchester United.

As for Mario Mandzukic in all this, they do believe talks are taking place, but he might end up being a separate deal altogether, as he wouldn’t come at ‘an exaggerated expense’ for United.

Gazzetta have by far the most detail on the affair, as Corriere dello Sport repeat a lot of the same, just more broadly.

The only difference is their belief Juventus value Dybala at €100m, while Lukaku is ‘only’ €83m, meaning some kind of agreement involving money might need to also be agreed in the Serie A champions’ favour.

It’s quite a vague mention, however, and doesn’t come across as deal breaking.