Dutch newspaper De Telegraaf are wrapping themselves up in the Virgil van Dijk situation. It’s a big story in the Netherlands because if Van Dijk leaves Southampton the transfer record for a Dutchman will have more holes blown in it than a block of Leerdammer.

Monday’s edition of De Telegraaf pretty much accused Van Dijk of being on strike, annoyed Southampton are denying him a Liverpool transfer, and said that explanations it wasn’t exactly that were simply window dressing.

On Tuesday they say he’s ‘refusing to train or play’.

Danny Hesp, chairman of the Dutch union for professional footballers, is quoted as saying: “Legally you’re not in a strong position if you refuse to do your job. You weaken your position and you get the whole world on you. It is an option we never advise. On the other hand, you may wonder if a club overlooks opportunities for a player.

“If a player can make such a nice move and there is so much money involved, I can understand that Virgil is taking action at the moment. We can help players, also abroad. Virgil has not reported it.”

Harro Knijff, a specialist in sports law, has also spoken to De Telegraaf and explained that even in the Netherlands, where footballers can take clubs to Arbitration Committee to try 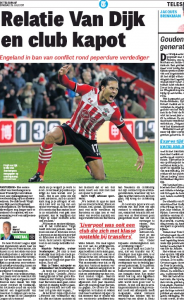 and force a transfer, the club refusing to sell often wins and either gets a higher fee or keeps the player.

Matt Le Tissier is quoted and of course sticks up for Southampton, questioning Liverpool’s class in the process: “I remember the times when Liverpool was a football club who set up with class around transfers. There have been no bids at Southampton for Virgil all summer. And until the moment there is a bid, a club should not talk to a player.”

With De Telegraaf openly reporting that Van Dijk, for all intents and purposes, is on strike, the situation gets even murkier.