There are probably hundreds of explanations why Leicester City had such an unbelievable season last year and ended up in a fight against relegation. But could it have something to do with tactical periodisation?

That’s what Portuguese newspaper A Bola asked Raymond Verheijen, one of Europe’s most successful specialists in the matter.

In a long interview with the coach published in today’s edition, he was questioned if the change in the Foxes’ form would be related to training methods. 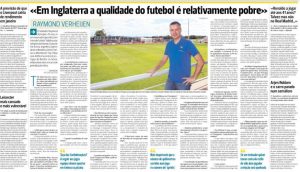 “None of this. It’s football problem,” Raymond Verheijen told A Bola. “Last year, they fought for the title, did not have European competition and recovered to a hundred percent between games. Now they are in the Champions League and have much less time to recover. Players accumulate fatigue and get tired.”

He also mentioned a rather important player leaving: “Leicester lost Kante to Chelsea, who was the midfielder with more actions per game and who recovered more second balls. Leicester are therefore more vulnerable in midfield, especially in the transitions.”

Asked whether some mentality problem could have caused Leicester’s problems, Verheijen claims it’s totally possible: “Last year, during many games, Leicester lived a dream. And dreams feed us and can make us invincible. This time they started losing and the illusion was gone, the dream became a nightmare.”

During the interview, Verheijen has made some heavy criticism of English football. He criticised how Premier League clubs choose their defenders and, once again, did not approve the way Jurgen Klopp treats his squad in terms of intensity.

Defender turns down option to join brother at Wolves – Has...