It seems that AC Milan could take not only Ivan Gazidis from Arsenal soon, but a player from the squad as well.

The rumours saying the Rossoneri are keen on getting the club executive have been around for a while, and now the Italian press adds another target to the list.

Tuttosport suggests that Milan could go after Aaron Ramsey, who’s running out of contract with Arsenal at the end of the season.

With Tuttosport being Tuttosport, we already know they don’t need much info to write a big article. So there are no claims of approaches or negotiations between the Italian side and the player’s staff for now. 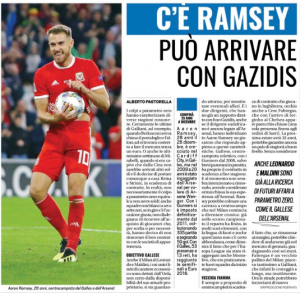 All they say is that Ramsey doesn’t seem so keen on signing an extension with the Gunners, and his departure should be a good chance for Milan to land him.

Tuttosport makes it clear that Milan have money to spend on signings, but players like Ramsey are seen like a great opportunity and available for free.