Wednesday night could have been filled with joy for Manchester United and their fans, as a win over Paris Saint-Germain at home would have seen them qualified from Group H in the Champions League.

Beating the Ligue 1 champions in the French capital, Ole Gunnar Solskjaer’s men could, and probably should, have walked away with all three points were it not for some individual failures.

Take Fred, for example, who got sent off in the 70th minute for a second yellow card, but could have easily been dismissed earlier on for a clash with Leandro Paredes.

The Brazilian set the bar for what ended up being a disappointing night for a few Manchester United players, as shown by L’Equipe’s ratings on Thursday morning.

Fred picked up a 3/10, a grade he shares with Victor Lindelöf, described as ‘unfortunate’ on Paris Saint-Germain’s opening goal, but also ‘too passive’ for their third.

The Sweden international was also at times ‘tortured’ by Neymar’s dribbling, who took full advantage of Solskjaer’s decision to go a bit more ambitious with his 4-2-3-1 formation.

The Manchester United manager also gets a 3/10 for his efforts, with his ‘late’ substitutions having ‘little impact’ on the game. 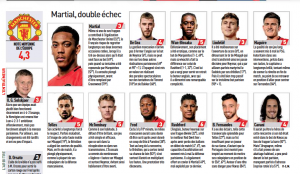 One of them was swapping Mason Greenwood for Anthony Martial in the 79th minute, as the Frenchman is described as suffering a ‘double failure’ and also getting a dreaded 3/10.

Despite his shot leading to Marcus Rashford’s goal, the striker ‘risks of regretting for a long time his two huge missed chances, skying his shot in the 49th minute when he was by himself in front of goal and when his attempt was pushed back by Marquinhos in the 57th’.

The man of the match on Manchester United’s end is Rashford, with a respectable 6/10, the only player in the line up getting above a five, as the team picked up an average of 4.3/10.

All in all, a night to forget for the Red Devils, who will now turn their attention to West Ham in the Premier League.