Max Eberl is a man with a plan. The Borussia Monchengladbach general manager is looking towards the summer, and SportBild say they’ve learned what he wants.

It’s considered that Loftus-Cheek would be ready for Gladbach’s first team, more so than the others, and the club would be looking for a favour from ‘cooperation partner’ Chelsea.

The Thorgan Hazard and Andreas Christensen deals are mentioned, and Gladbach would be looking for something similar to those.

Having pretty much given up on keeping Christensen when he loan from Chelsea ends, Eberl has now injected some hope into the situation, with SportBild quoting him as 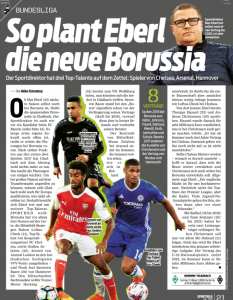 saying: “He still has a three year contract with Chelsea from the summer, but we do not give up yet, it’s not futile.”

For Eberl to go public on continued Christensen hope must mean there’s at least a chance, however small it is.

An ideal scenario for Gladbach would be Christensen staying for at least another season, and Loftus-Cheek arriving, either on a Hazard type permanent deal, with buyback option, or a loan.

Loftus-Cheek has managed just 14 Premier League minutes so far this season, but has added 2 appearances in each of the EFL Cup and FA Cup.