Home Europe Doors will be ‘opened wide’ and player can join Liverpool for publicised...
SHARE

Claims from the English media of Liverpool being ready to pay around €97m for Ousmane Dembele are all over the Spanish media on Thursday.

However, it’s the back page of Mundo Deportivo which probably gives the most insight. Journalist Miguel Rico is well connected at Barcelona and a very experienced member of the Catalan sport media.

He often uses his back page to give a forthright view on situations or completely dismiss the idea of a transfer happening, regardless of what is said elsewhere in the newspaper.

Rico says there’s no record at Barca of such an offer or Liverpool making any attempt to inform the club they’d pay so much for the Frenchman. There’s also a lack of belief that ‘in these circumstances’ an offer that high could be achieved.

If it’s true, and the Reds agree to send such an amount, then Rico says ‘the doors will be opened wide’ in the summer for Dembele to leave. He’ll be sent off to Anfield happily. 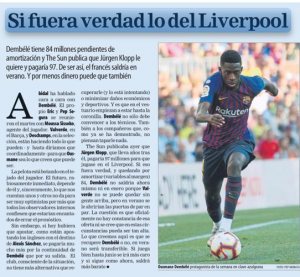 There’s a couple of reasons for that. The player’s reported poor attitude being one, and that ‘only’ €84m of his transfer fee is left to be amortised, so anything above that is a plus for accounting purposes.

‘For less money also’ – Rico even makes it clear a deal could be done for a smaller amount.