Earlier on Thursday, an article was published on Area Napoli regarding the situation surrounding Jorginho’s future at Chelsea.

This all came as Maurizio Sarri is seemingly keen on being reunited with a player he has already managed twice before, first at Napoli before his move to Stamford Bridge.

In fact, the 7 Gold sports editorial team, whom Area Napoli were relaying, stated Juventus were willing to ‘give’ Miralem Pjanić to Chelsea as part of the deal taking Jorginho to Turin.

Well, they aren’t the only ones believing the Bosnian could head to London in the near future, as Corriere dello Sport claim this summer is a likely time for him to finally part ways with a club he has been contracted to for close to four years. 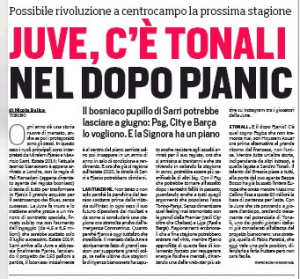 With that in mind, interested clubs are mentioned, with Chelsea and Manchester City the two from the Premier League named, alongside Paris Saint-Germain, Real Madrid and Barcelona.

Juventus might have ‘resisted assaults for their midfielder’ in the past, but with him close to entering his thirties and his performances dwindling of late, there’s a feeling now might be the time to get rid while he’s still valuable as he’s ‘more expendable’ than others in the squad.

With many interested teams, there will clearly be hope of a mini auction taking place, but Corriere do point out that all this remain ‘embryonic reasoning’ for the time being.

Nothing to get too excited about, but we know Chelsea have taken an interest in Pjanić in the past, so it wouldn’t be surprising to see them sniffing around if they felt an opportunity was there to be taken.