Let’s take you back to January, back when football was still a regular thing on our televisions and clubs didn’t have to think about money as much as they do now.

Leicester City were on a good run, fighting for a European spot, and to secure the future of their midfield, they decided to try and sign Ibrahima Diallo from Stade Brestois in Ligue 1.

A bid of €16m was allegedly made and subsequently turned down, with the player staying to finish the season, attracting more suitors along the way, like Everton.

Fast forward to now, and both Leicester and the Toffees remain keen on the player, according to local newspaper Le Télégramme.

Looking at whether the French club could possibly hold onto their starlet for another season, the outlet reveal Carlo Ancelotti’s and Brendan Rodgers’ sides are ‘following him closely’.

When he first arrived on loan from AS Monaco, Diallo made a deal with Stade Brestois that a door would be opened for a departure after two seasons. 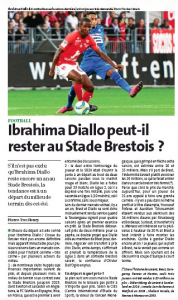 Spending the first in Ligue 2, the defensive midfielder then continued his good form in France’s top-tier this year after being bought for around €2m, with the time now come to let him go if the right offer comes along.

However, a price will need to be met, and it’s explained Brest want around €20m, especially since AS Monaco get 20% of any profit.

So, the higher the price, the more both teams pocket, and that’s why there’s a belief Diallo could be kept an extra year, which the player ‘wouldn’t see as a slight’ even if he would like to ‘discover Europe in the short term’.

The door is open, and now it’s up to the interested sides, like Everton and Leicester to shove their foot in it to avoid it from closing for another 12 months.

A little bonus is Le Télégramme do feel ‘the trend leans towards an exit’.