The Coronavirus outbreak has forced European countries to take drastic measures to fight the pandemic and one of those is to suspend different football.

The crisis will see clubs face financial losses, especially those in the second division who would be in danger of missing out on promotion.

Leeds United, West Bromwich Albion, Fulham, Brentford and a few other Championship sides are battling it out to make it to the Premier League next season.

The Covid-19 crisis could force them to wait longer, if the season is declared void.

Marca takes a look at the situation of clubs from England, Spain, Italy, Germany and France, who could be in danger of losing a place in the top flight.

The newspaper has managed to gather comments from Brentford goalkeeper David Raya, who joined the Bees from Blackburn Rovers last summer.

“We had to play against a direct rival like Fulham when we stopped. We came from a bad streak, but in the last match, we beat Sheffield Wednesday (5-0). We’re stuck in the middle of the fight,” Raya said.

There have been various rumours on how the season must end and one of them includes restarting the league and playing matches behind closed doors. The Brentford custodian isn’t a fan of this idea and has explained the reason. 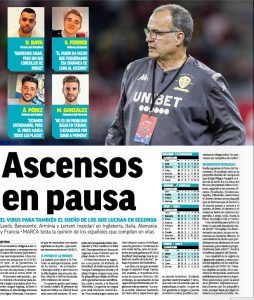 “The goal is to go up, we are having a good season and we hope that it can be finished. There are still nine matches left! And if not, let it be with an agreement that doesn’t harm anyone,” he stressed.

“What I would not like is to play behind closed doors as soon as possible and put all of us at risk. We don’t want to be guinea pigs.”