A nice fact about Danilo’s move from Manchester City to Juventus this summer is his reencounter with Alex Sandro. The duo of fullbacks had previously played together for Santos, Brazil and Porto. Now they take this new challenge at the Old Lady.

To talk about their partnership, Turin newspaper Tuttosport conducted an interview with Vitor Pereira, who used to be their manager at Porto.

Pereira, who currently manages Shanghai SIPG in China, talked a lot about the two, and had a word about Juventus’ deal with Manchester City as well.

First asked about why Danilo couldn’t really keep a starting place at Real Madrid or Manchester City, Pereira said: “For different reasons: at Real, Carvajal had as an advantage… Spanish, loved by the public and the press. At City, Walker, who has a lot of experience in the Premier League.” 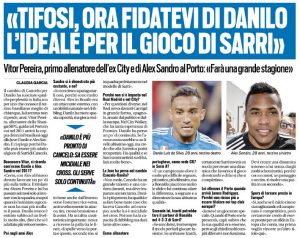 “Danilo has lost some continuity. If he had had it, he’d be at a very high level today, but I believe that he will be able to recover at Juventus. He has qualities and if Sarri bets on him, he will do very well.”

Pereira is Portuguese, and of course knows João Cancelo very well too. So he was quizzed if Juventus may have lost something in the deal with Manchester City.

“I don’t think so. Cancelo has a great talent and a career ahead of him, but he still has to learn so much. Danilo is more ready, he has quality and he knows how to do so many things that Cancelo used to: for example, he too is deadly in crosses. Then he doesn’t have the ability to dribble but he will give many other things.”

Now after finishing their pre-season, Juventus have two weeks of preparation until the start of Serie A. The Old Lady face Parma on August 24th.