A potential Newcastle United takeover has been making headlines for the past few months.

A Saudi consortium were keen on taking control of the Tyneside club, but they withdrew their bid to become the new owners of the Magpies last month.

Paris based company Bellagraph Nova Group (BNG), co-founded by Evangeline Shen, Nelson Loh and Terence Loh, have confirmed their intent to be new owners of the Premier League club.

It’s claimed the amount is ‘lower than all those mentioned’ when the Saudi royal family were interested in taking over the English club.

An internal source told AS: “[Mike] Ashley [Newcastle owner] is desperate and we are not, that’s the difference. We don’t think Ashley deserves more than what we offer.”

The outlet adds BNG’s sports plan for Newcastle is ‘ambitious’ and they have a ‘clear objective’ to be one of the best clubs in Europe. To do this, they plan to sign Cristiano Ronaldo… yep, they’ve gone there.

A day after BNG confirmed their desire to takeover Newcastle, the company’s official social media channels stated they are looking for “new synergies”, along with a photo of the Portugal international.

According to AS, the Paris based group has ‘direct contact’ with the Juventus star. 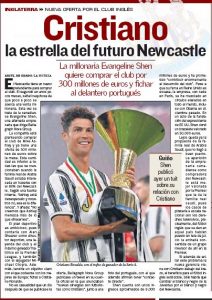 If the Bellagraph Nova Group pass the Premier League owners and directors test and they manage to sign Ronaldo, AS explain the ‘benefit for English football will be double’.

AS state: ‘Newcastle have a new suitor to buy the club. The second in a few months, an unequivocal sign that little by little a million dollars sale is approaching.’