On September 5th, France and Atletico Madrid forward Antoine Griezmann explained during an interview with L’Equipe how good Chelsea’s N’Golo Kante is during training sessions.

Today’s edition of the French newspaper has published an interview with Steven Nzonzi, who along with the two above mentioned players, was part of his country’s World Cup winning squad in July.

The AS Roma midfielder replaced the former Leicester City man after 55 minutes in the final as the latter was reportedly sick.

When Nzonzi was also asked if the west London club’s star didn’t enjoy a good game in the final, he said: “Not at all! Honestly, I don’t see him having a bad game. I’m focused on what the team is doing and I don’t really think N’Golo was missing. It’s true what I’m telling you, it’s not that I am being kind to him.”

Didier Deschamps started the ex-Stoke City man only once as he was forced to settle for a place on the bench during the World Cup in Russia. He also stressed what Kante brings to the team and explained why he was worried when he replaced the Chelsea midfielder in the final. 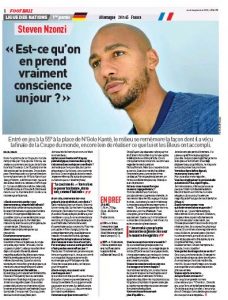 “When we are a substitute, we have the chance to analyse the game and know what attitude we should have. N’Golo brought a very important balance throughout the competition. And I did not want any imbalance in the team after my entry,” Nzonzi stressed.

The whole French squad are big fans of Chelsea’s Kante, and Nzonzi will be well aware he’s simply back up to the midfielder.