Celtic initially signed Odsonne Édouard on a season-long loan deal from Paris Saint-Germain before making his deal permanent before the start of the season and, in the process, making him the club’s most expensive signing.

The 20-year-old sat down for an interview with Onze Mondial where he explained in detail why he decided to leave the Ligue 1 winners and make a switch Celtic Park for good.

“I needed to go for on a new project, change of air. I was stuck at PSG. There were great players in my position,” he said.

“As I am young, I needed regular playing time and therefore to find a new base. I decided to leave PSG to give a new impetus to my young career. I also needed to leave my hometown and my family environment. I needed to try something else.” 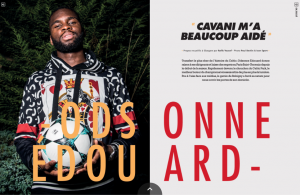 But why Celtic? Well, Onze Mondial asked him that too, and, in his mind, it was a very easy decision.

He continued: “I chose them firstly because they’re a big club that plays in Europe every year. I had a long chat with the manager. He explained his project and what he wanted to do with me.

“I appreciated what he had to say, I had a good feeling about it. From that moment, I immediately accepted to come. I needed a new challenge. You don’t refuse a club like Celtic.”

It’s clear the fan favourite would have struggled for regular playing time if he’d continued at PSG, what with the likes of Edinson Cavani and Kylian Mbappé in front of him in the pecking order, which is why Édouard’s transfer to the Scottish Premiership champions made sense all along.

For them, and for him.

Since joining the club, the forward has scored 23 goals in 54 appearances in all competitions, as well as picking up eight assists.