Following his two good performances against Manchester United in the Europa League last season, Leander Dendoncker became a target for José Mourinho over the summer.

At least, that’s what some members of the Belgian media had everyone believe.

De Morgen were the ones who stated the defensive midfielder was high on the Special One’s list, yet a move for the 22-year-old never materialised, probably due to Anderlecht’s reluctance to sell him, having already let Youri Tielemans join Monaco.

Prices of up to €38m were quoted, even if a smaller fee would probably have sufficed, and the saga surrounding Dendoncker caused the player to get carried away with the whole situation, leading him to underperform on the pitch as his head was elsewhere.

Trying to put all of it behind him now, at least until January, the Belgian starlet opened up a bit more about a possible move to Old Trafford to Sport/Foot, and how close he was to joining Manchester United in the summer. 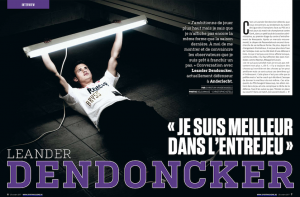 He said: “If it was as concrete as was being said, if they wanted me at all costs, I’d already be there. When you play for Anderlecht and you have the chance to go there, you don’t hesitate, but Anderlecht had their bit to say. Everyone had to agree.

“For a club to pay what they were asking for, the club needed to be concretely interested. If Anderlecht asked for a lot of money, it’s because they knew it would be difficult, and, at that time of the year, the price was over exaggerated”.

Believing the €38m price tag was thrown around to ‘scare clubs’, Dendoncker seems to forget his club’s own president said a ‘hefty €20m or so bid’ would see Anderlecht say yes.

Still, it seems Manchester United’s interest in the Belgian defensive midfielder was there, it just wasn’t as concrete as some made it out to be.

Having already spent a lot of money by mid-August and focusing on a wide player (like Perisic), Mourinho might have felt waiting an extra year, perhaps for Michael Carrick’s retirement, before going all out on Dendoncker was the right thing to do.

Only time will tell, and there’s every chance the Red Devils will return for more next summer, when signing the defensive midfielder will be far easier.