Home Europe DoF has ‘met with Man United player’s agents over the past few...
SHARE

Injured in training on Monday, it’s believed Chris Smalling will not play for Roma again before 2020.

This comes at a bad time for the Manchester United loanee, who was in a great run of form and growing in stature in Italy’s capital, which led to the Serie A side trying to get him to join them permanently.

We won’t bore you with the previous details, but the gist of it all is that the Premier League side want €20m, and Roma don’t want to pay that much, having made a first offer in the €10-12m range, which was turned down.

Other clubs have joined the fray too, which has led to Smalling telling the Italians to let him wait until the end of the season for his decision, but that doesn’t mean they aren’t going to continue to try and get a deal sorted with United. 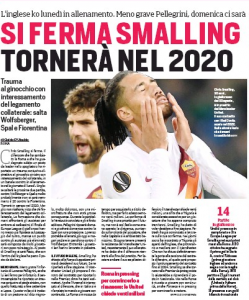 According to Corriere dello Sport, Gianluca Petrachi has ‘already started to work on [Smalling’s] confirmation’, having ‘met the player’s agents at Trigoria over the past few days, who will try to mediate’ with Ole Gunnar Solskjaer’s side.

It’s said Manchester United ‘haven’t definitely closed the door to a sale’, which is encouraging, but it will all come down to the player.

Down that end, Paulo Fonseca is ‘pressing to try and convince him to stay’.