Towards the end of the transfer window, there was a very brief few days where Lazio were said to be interested in Celtic’s Odsonne Edouard.

The young Frenchman was seen as an ideal supplement to Ciro Immobile, but Corriere dello Sport quickly dismissed it as a rumour and nothing else, leading it to disappear.

However, that very same newspaper now dedicate a whole page to the story, and they very much believe the Celtic player is of interest to the Italians.

Igli Tare (their director of football) has admitted liking what Edouard had to offer, but denied ever making an approach for him, while Simone Inzaghi is said to have ‘watched, studied and valued’ the 21-year-old. 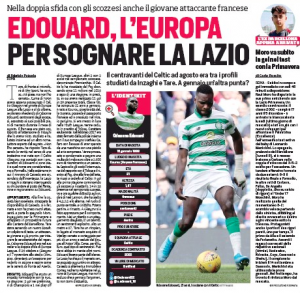 While Lazio might not have made an official move for the Celtic starlet, Corriere do believe the club ‘made contact’ with the player’s representatives around the time when Felipe Caicedo’s renewal was in doubt.

With the two sides meeting in the Europa League towards the end of October, this will be the perfect time for the Serie A side to look at him even closer, perhaps with a view to making in move in January?

It will take a lot for Celtic to part ways with their star striker, and we doubt Lazio will have the money for that during the next transfer window.