Brought in by Newcastle United for the second half of the season on loan, Danny Rose is finding some consistency under Steve Bruce these days.

The Tottenham Hotspur defender, who struggled to get regular minutes under José Mourinho, sought out a move in January, knowing full well that, at 30, he needed to be on the pitch more often than not.

The Magpies don’t have an option to make the move permanent, and we’ll have to see what they want to do once the season comes to an end, but if a move to St James’ Park doesn’t materialise for the England international, one to Italy might.

The reason for this is Lazio’s director of football Igli Tare, who, according to Corriere dello Sport, ‘likes’ the left-back’s profile, as he works towards bolstering the squad for next year’s Champions League.

Even if their form has been poor of late, the Rome based side look set to qualify for next year’s European competition, giving them both an extra boost in cash and a need to add quality and experience to their squad. 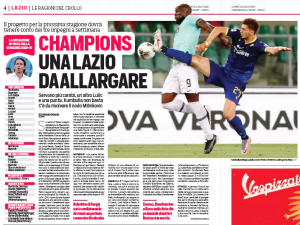 That’s where Rose comes in, a near-veteran with a good amount of Champions League football under his belt, and with just one year left on his contract at Tottenham, he wouldn’t be overly expensive either.

His contract might be, but he remains in the ‘list of potential objectives’ for the Serie A side this summer.