Not only is he one of the best defensive midfielders in the world, but he’s also as humble as they come, once again showing his class in an interview with Ouest-France in, well, France.

The Chelsea star was interviewed by the local newspaper, who cover the Caen area and was asked how he felt about all the praise he’s received in recent years, ever since leaving the Ligue 1 side to sign for Leicester City in the Premier League.

He said: “Rewards are great recognition, but, how do I say this… It’s not that it doesn’t matter, but it doesn’t win you games! I keep telling myself: these are great years, but football changes quickly. You always have to start from scratch. 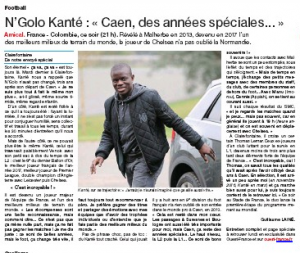 “I prefer winning titles and sharing emotions with my teams than having individual trophies or to hear that I’m among the best in the world.”

But, to him, all that doesn’t matter, unlike other footballers, whose apparent sole obsession is to walk away with that gold football in January.

N’Golo Kanté: the anti-Cristiano Ronaldo? He certainly comes across as that.