On their way back up after a terrible start to the season, Watford are finally out of the relegation zone thanks to a 3-0 win over Bournemouth.

Nigel Pearson has a lot to do with that, helping change the morale in the dressing room and getting results on the pitch after some fairly embarrassing scorelines during the first half of the campaign.

One of those was the 8-0 defeat to Manchester City, a game most Watford fans will never want to hear about again, but happens to be one Christian Kabasele talked about in an interview with Sport/Foot Magazine, even if he didn’t feature for the Hornets that day.

He’s since recovered his starting spot under Pearson, but even from the bench, the Belgium international wanted to hide due to what was happening on the pitch.

He said: “I was disgusted – because I hadn’t played and because we’d lost – but I was mostly ashamed. 8-0, that’s a result you only see with the youth teams. The Premier League is the most followed league in the world, and the whole planet was able to see how Watford were ridiculed that day.

“The worst is that Manchester City could have had 20. After 18 minutes, it was already 5-0 and the assaults continued. City were ruthless. A normal team would have slowed down after two or three goals, but they battered us until the end.

“We didn’t have time to breathe and to plug the gaps at the back. City were good, but we were frankly bad. Such a defeat is inexplicable and unacceptable.”

The defender then went on to describe what the dressing room was like once the final whistle had blown, explaining it was ‘calm and everyone was looking at the ground’. 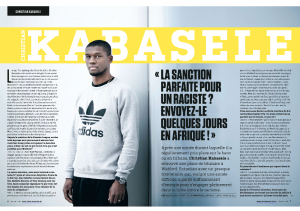 He continued: “After five minutes, Etienne Capoue said ‘Guys, we f***ed up today. Let’s throw this game in the bin and focus on the next. Such a debacle can’t happen a second time’.”

Perhaps thankfully for Watford, that wasn’t the worst result by a Premier League side this year, as Southampton went on to lose 9-0 to Leicester a bit later on, with Ralph Hasenhüttl’s players then deciding to donate part of their wages to charity as an apology for their performance that week.

The Hornets, on the other hand, didn’t do anything after the 8-0 loss to Manchester City, which is something Kabasele now regrets a bit.

He said: “To be honest, we didn’t talk about that here. Maybe we made an error. We could have made a gesture towards the fans that had made the long journey to Manchester.”

Manchester City secure deal for Brazilian – Arsenal had made an approach

Manchester City secure deal for Brazilian – Arsenal had made an...