Last week, Catalan newspaper Sport reported Ronald Koeman’s days in charge of Barcelona are numbered, and the club were already taking steps to appoint a replacement.

It wasn’t an unusual stance, given it’s been reported across the Catalan media that it’s probably a matter of time, and a small amount of that, until the Dutchman is shown the door.

What made the report stand out was a claim that Jordi Cruyff had been approached as his possible successor. Cruyff wasn’t interested, and that was that.

However, Mundo Deportivo say the report was met with ‘disgust’ and anger by those in charge at Barcelona. According to the claims, the Blaugrana leadership will have known there was no point in asking Cruyff, so wouldn’t have done it anyway.

Currently working in a technical capacity for Barcelona, Cruyff believes Koeman is doing a 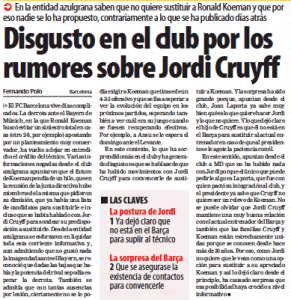 good job in difficult circumstances. On top of that, the Koeman and Cruyff families have been close friends for decades, so he wouldn’t want to stab his compatriot in the back.

All in all, it’s made clear that whoever takes over from Ronald Koeman at the Camp Nou, it’s unlikely to be Jordi Cruyff.