Friday’s edition of L’Equipe has a big article on Newcastle United’s move for Bruno Guimaraes, but he’s not the only potential Magpies signing covered by the French newspaper.

According to L’Equipe, Newcastle are again making moves to sign Issa Diop from West Ham United. The Magpies considered the defender at the start of the window, and then moved on to other targets.

They’ve found those impossible to complete so far, with attempts for the likes of Lille’s Sven Botman and Sevilla’s Diego Carlos hitting the buffers, so it’s back to Diop they now go.

L’Equipe states the new management at Newcastle is ‘seduced’ by Diop’s experience in the Premier League, presumably thinking he could slot in and help immediately.

West Ham’s position in the table right now is much more attractive than that of the Magpies, however, it’s thought money could play a big role in persuasion. 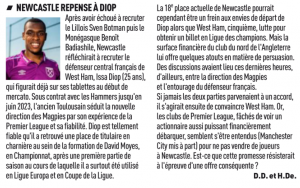 In that regard, ‘discussions have been taking place in recent hours’, between Eddie Howe’s side and the player’s camp.

The idea is to get an agreement from Diop, and then move to make sure they can convince West Ham.

That’s been a theme for Newcastle transfers this month, and is far from being unusual.