Continuing their tradition of doing all things Portuguese at the club, Wolverhampton Wanderers replaced the departing Nuno Espirito Santo with Bruno Lage.

When Rui Patricio left for AS Roma, José Sá was signed to take his place, and now we have a new Portuguese forward potentially on his way to the Molineux.

As you might have seen in the past, it’s believed that Wolves hold some kind of interest in Milan’s Rafael Leão, who struggled to fully convince under Stefani Pioli last year despite making 40 appearances in all competitions.

Scoring seven goals and assisting another six, the 22-year-old is one of the players who could be sold this season alongside Jens Petter Hauge.

That’s what Gazzetta dello Sport are reporting, claiming it’s a case of either/or for the paid, meaning that if one goes, the other will stay. 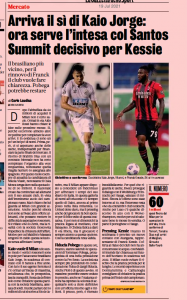 Right now, both have suitors, with the Norwegian the likelier to depart since offers of around €10m have been received from Germany for his services, but with Milan asking for €15m, Leão could end up being the one sacrificed if those demands aren’t met.

This is where Wolverhampton Wanderers come in, as the Italian newspaper state ‘there is some discussion’ with the Premier League club, ‘which is why the moves of sales are well evaluated’.

That’s all they have to say for now, but it’s an indication that Jorge Mendes, who represents Leão, still has his part to play in Wolves’ transfer window, and we could see one or maybe two more of his clients strutting around Molineux this coming season.