Following the end of any transfer window, there’s various stories about moves which failed at the last minute.

Blame games inevitably start, with agents not wanting to be the fall guy after their client has missed out on a transfer which was expected to happen. Clubs also send out messages to the media, and it all becomes a case of people wanting to pass fault to others.

This is now the case with Alex Collado, who was supposed to sign for Sheffield United at the end of the recently concluded window. Ahead of the final days of the market, there were reports in Spain of an offer from the Blades, but the player’s camp were hesitating, waiting to see if anything better would arrive.

They’d already rejected loan moves from Barcelona to SC Braga and Club Brugge, and in the end an agreement was reached over a move to Sheffield United.

Mundo Deportivo report that everything from Barcelona’s end was signed for the move to happen. Their sources have told them that Collado had also signed the paperwork, and then Sheffield United failed to do so. 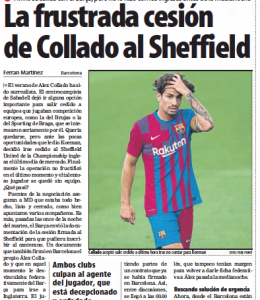 The English club’s stance is that the player’s agent tried to change previously agreed conditions, and that killed everything.

They then called Barcelona to tell them the deal had collapsed, and the Blaugrana were left in ‘disbelief’, and were ‘incredulous’ with the situation. Given it was so late, there was no time to agree a move elsewhere, and now Collado is left without a team to play for.