If Tottenham Hotspur were expecting to make big money with Marcus Edwards’ exit from Vitória de Guimarães, then they may have to forget about that.

When the Portuguese side signed the winger from Spurs in 2019, it was agreed that 50% of his future move would go to the London club.

Edwards has shown big potential since then, frequently linked with a move, and as reported by A Bola, Sporting are looking to close a deal for him this week.

Vitória de Guimarães initially demanded €12m for his sale, especially because they only get half of the money. Now it’s said the deal should now be made for between €7m and €8m, with the Lions including a couple of other players in the business. 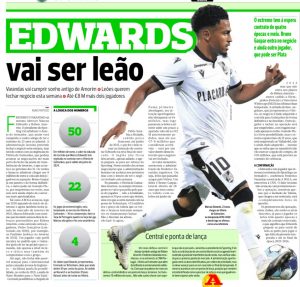 So that’s obviously bad news for Spurs. First because Edwards had been linked to English clubs, and a move back to his home country would, of course, involve more money. With Sporting including players in the deal, that’s only dropping his price, and Tottenham should make around €4m with the operation, although there’s the possibility Spurs could question the actual value of the whole deal.

The winger has eight goals and three assists for Vitória this season. Despite the Lions’ wish to close a deal as soon as possible, A Bola points out that the talks could drag on for a little longer, perhaps until the end of the season.