Home Europe Disagreement between Paratici and ‘the court of Daniel Levy’ over Tottenham manager...
SHARE

Monday’s edition of Tuttosport has a headline reading: ‘Gattuso, here’s the truth’

The manager has had a crazy few weeks and it’s suggested he’ll soon want to publicly give his version of events. Appointed by Fiorentina, the Italian left the club within weeks, and then looked on the verge of taking over at Tottenham.

A huge backlash from supporters seemed to result in Spurs changing their mind and insisting they wouldn’t be appointing the former midfielder as their new coach.

Tuttosport don’t believe that’s the correct version of events, and they claim that ‘keyboard rabbits’ spread ‘false news’ about previous Gattuso comments, trying to make him look as bad as possible.

The Italian newspaper are not at all convinced that a social media backlash was the reason behind Tottenham dumping the manager.

Instead, it’s stated that ‘in the court of Daniel Levy’ not everyone liked the idea of Gattuso from the start, after Fabio Paratici went for the deal, and there’s even claims of some kind of ‘sabotage’. 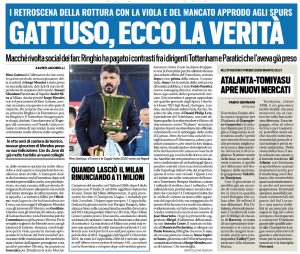 Prior to the Tottenham saga, it had been claimed Gattuso and Fiorentina split due to too much transfer interference from Jorge Mendes.

Tuttosport also rubbish this, explaining Gattuso has been a manager for eight years and doesn’t have a record of pushing Gestifute players to clubs.

On top of that, it’s pointed out Mendes isn’t the manager’s official agent, more of a friend and advisor.