Despite Dennis Praet being the belle of the ball at Torino these days, there remains some uncertainty regarding his future.

That’s because the Belgian, currently in Italy on loan from Leicester City, is set to returns to the King Power Stadium unless the Serie A side trigger the option to buy in his contract.

The amount they would need to pay varies according to the reports, with both Gazzetta dello Sport and Tuttosport giving us different figures on Friday.

The former of the two explain that Torino would need to give Leicester €12m to make the move permanent, while the latter have the sum at €15m.

The issue for the Italians is that their manager, Ivan Juric, ‘was clear’ about one thing, and that’s having Praet in his team next season. 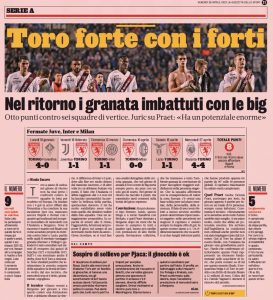 Regardless of the amount, whether it be €12m or €15m, his injuries this season have made Torino a bit wary about spending so much on the player, which is why both newspapers are in agreement over one thing: the demand from Turin will be for Leicester to extend the loan.

We’ll have to wait and see what comes of it, but the rumours in England are that the Foxes should be open to it, especially if they know that, one way or another, they’ll get their money by making sure the option to buy is a mandatory one.