Fenerbahce are in the market to sign at least two wingers, and Fanatik say Eliasson is one of their targets. The Turkish side have also been linked with a move for Bournemouth’s Arnaut Danjuma.

It’s reported the first round of talks went very well, and both parties will meet again in the near future to discuss a potential transfer. Along with Fener, Fanatk claim Lazio and Villarreal are also following the situation of the player. 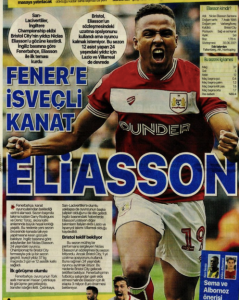 Bristol City have contracted of the 24 year old for at least another season after they activated their option to extend his deal.

However, it’s reported the Swedish winger is keen to leave the club to start a new adventure.

Eliasson scored three goals and provided 12 assists in the Championship this season and was one of the most important players in the team.