After Tuesday’s deadline for the Riyad Mahrez to Roma deadline passed, and no Italian newspapers on Wednesday due to a bank holiday, we knew what to expect in Thursday’s editions.

Every single one covering the story are clear in their headlines: this is the end of the road and Monchi will move onto Juan Cuadrado and other potential targets.

Except that if you read a little deeper, that isn’t quite the case, as shown by Il Messaggero who leave the door open for a return, mostly due to the fact the Leicester City star is quite vocal about leaving, which could cause the Foxes to reconsider down the line.

That was also something we anticipated, because until the transfer window is shut, anything can happen.

What we didn’t expect, however, is to hear that Monchi was misled by Mahrez’s agent.

According to the Italian newspaper, the Spanish director of football, widely regarded as one of, if not the best in the business, was told by the Leicester forward’s representative his client would be available at a certain price.

This valuation, we can only assume, appears to be what Roma eventually ended up matching, which is €35m.

The fact Il Messaggero say ‘unfortunately, that wasn’t the case’ suggests the information provided by Riyad Mahrez’s entourage wasn’t quite up to date.

Either that or no one close to the deal could predict how stubborn Leicester would be about a sale. 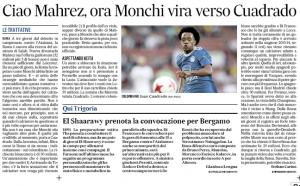 That last part, however, seems quite hard to believe considering the Premier League club’s stance has always been very clear and Roma never came close to matching the £40m+ valuation.

Maybe Mahrez’s agent was just blindly optimistic he could talk Leicester into agreeing a lower offer.

Either way, it’s also worth pointing out none of the local newspapers have backed France Football’s claims that a new offer of €38m was made by Roma.

Only Corriere dello Sport mention it, and they say it was €37m, with their information coming from ‘English sources’.

To us, that sounds like someone trying to keep the Roma story relevant at a time when suitors for the forward are drying up rather quickly.

Belief Wolves man could go for €50m this summer – Barcelona...