At the start of the week, it seemed likely Luís Campos would be leaving his job at Lille for a new challenge.

It’s been widely reported that the director of football had decided to leave the French side and was in negotiations with a few other clubs.

Portuguese outlet RTP even brought a story saying Campos would be joining José Mourinho at Tottenham Hotspur, while other media outlets said Newcastle United were in the race as well.

But things had a big turnaround in the past couple of days, and as explained by newspaper Record, the official may end up staying where he is.

The outlet has learned that Campos’ wish is to continue at Lille, despite his desire to make some changes at the club. The Coronavirus crisis also makes it a difficult time for him to leave. 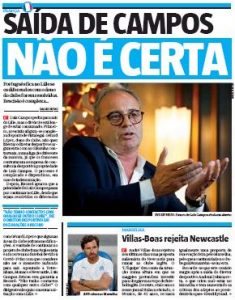 Record also managed to get a quote from Campos, as the official was asked about any talks with the likes of Monaco, Newcastle and Tottenham Hotspur.

“I have no contacts with any other clubs,” he responded. He also denied talking about his situation at the French side.