Everton striker Cenk Tosun continues to be linked with a move away from the Goodison Park and Sabah claim Besiktas sporting director Ali Naibi will fly to England to convince him over a return to the Super Lig side.

Tosun has fallen down the pecking order at Everton after the arrival of Moise Kean, and Sabah say the Besiktas director is looking to take advantage of the situation.

The Turkey international joined Everton for €27m in 2018, but he’s failed to prove himself in the Premier League. Tosun has also been linked with a move to his boyhood club Eintracht Frankfurt in recent days but the Turkish media are adamant he will join Besiktas if he decides to leave Everton. 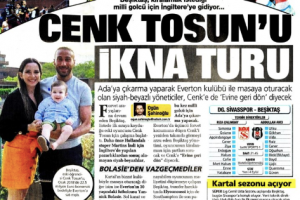 Although previous claims from the player’s camp stated he’s determined to stay at Everton and fight for his place, Tosun could decide to leave the club to play more regular first team football ahead of Euro 2020.

The former Gaziantepspor player still has three years left on his Everton contract.