When clubs sign players on a loan deal with an option to buy, they normally have until the last day of June to say if they’re keeping him or not.

That’s why players, agents and clubs often wait for this date, and in case the option isn’t used, they start making the moves to decide where he will play in the next season.

But that doesn’t seem to be the case of Diogo Gonçalves, who should not stay at Nottingham Forest for longer after an unimpressive loan spell.

Although the Championship side had an option to buy him on a €15m deal this summer, Portuguese newspaper A Bola reports it’s already decided that he’s staying in his home country for next season. 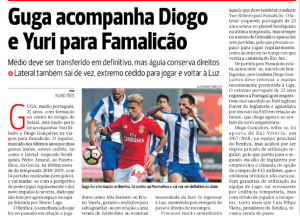 The player is set to be loaned to Famalicão. His club Benfica still trust his potential, and that’s why they ruled out a permanent sale.

Gonçalves only made ten appearances for Nottingham Forest this season, without any goals or assists. He barely had a sequence of games for the club, so it’s no surprise they didn’t want to spend that amount on him.

From France: Man United now in ‘advanced negotiations’ with director of football