Called a ‘protagonist’ in Manchester United’s win over PSG which gave the club a place in the Champions League’s quarter finals, Diogo Dalot was interviewed by Portuguese newspaper Record this week.

The right-back has talked about the big night he had in Paris, and what he’s looking for in the next stages of the continental tournament.

Although Manchester United’s win got all the attention, Dalot’s former club Porto also managed a dramatic qualification, having beaten Roma in regular time and scoring in extra time after a penalty decided with VAR.

Dalot has spoken a little about it, and has claimed that it would be great to face his old teammates in the next stage of the tournament.

“Of course it would be good to face FC Porto. It always feels good to return to my home. We have to wait and see what the draw will say,” Diogo Dalot told Record.

“It was a night to remember late … along with the qualification of FC Porto. It was a joy! I felt I could create danger if I shot. I was lucky that the ball hit the arm, but I think the decision was well taken. Fortunately it was a goal! We always believed we could get through.

“I felt very good. Playing is how I feel good, especially in this event and at these stages.” 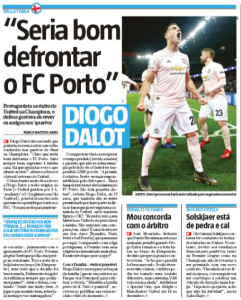 On joining the list of Portuguese players who have featured for Manchester United, Dalot said: “Ronaldo has his story at United and I want to make mine. Not entering comparisons, of course! It is an honour to be one of the five [Ronaldo, Nani, Bebé and Joel Pereira] who have come here. Compared with the Portuguese league, the Premier has a higher requirement and intensity. It’s at this level that I want to play.”

Dalot will be hoping for as many minutes as possible between now and the end of the season, and with a chunk of them of them in the Champions League.

Player can ‘soon fly far from England’ after Wolves exit –...