Marcus Edwards surprised many when he decided to leave Tottenham Hotspur for Portuguese side Vitória de Guimarães in the last window.

The 20-year-old has largely been used as a right winger and has managed one goal and two assists in 11 appearances in all competitions this season. His only goal for the new club came in their 3-2 defeat to Arsenal in the Europa League clash last month.

Portuguese newspaper Record sat down for an interview with the attacker and asked him how a youngster who trained in Spurs’ academy ends up at a club based in Guimarães.

Responding to that, he said: “It is not easy to explain and it was never something that I had possibly imagined possible in the past. But the truth is that after the possibility came up it wasn’t necessary to think too much.

“I needed a project where I could develop my football, settle down and move forward in my career.

“Things were not always easy and I think I needed a challenge like that. It was also very important to feel that Vitória really wanted me. I felt very desired, and after talking to my family, the decision was easy. And for now, I couldn’t be happier for the option I took.”

Edwards’ compatriot Chris Willock left Arsenal for Benfica in 2017 and is currently on loan at West Bromwich Albion. The wideman explained the conversation he had with the current Baggies forward convinced him to join Vitória.

“Portuguese football is not very well followed in England and the little I knew was due to my friend Willock, who was playing in Benfica,” he said.

“When the possibility of Vitória came up, I also talked to him, who told me it was a big club here in Portugal. He knows me very well and he was not wrong.”

Edwards admitted leaving Tottenham and moving to Portugal was a difficult step in his career. 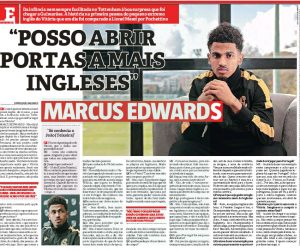 “It took some courage, it’s always a difficult step to take, to leave home. I left my family, my friends and my comfort zone,” Edwards explained.

“I came to a very different reality from the one I was inhabiting, but it was a step that I wanted to take. This was the ideal opportunity to do so. It may have been a difficult step, but it was necessary for me and for my career.”