Barcelona’s transfer strategy could change depending on whether Jasper Cillessen decides to stay or leave the Camp Nou in the summer transfer window.

The 29-year-old has been restricted to appearances in the Copa del Rey, while German international Marc-André ter Stegen has been preferred by Ernesto Valverde’s side for La Liga and Champions League fixtures.

Catalan newspaper Mundo Deportivo claims Cillessen’s move away from Barcelona should not be ruled out. We earlier carried a report as to who could replace him at the club and the list includes Brighton’s Tim Krul and Wolverhampton Wanderers target Rui Patricio.

The Dutchman has a release clause of €60m in his contract and has been linked with several clubs across Europe.

In England, Liverpool and Arsenal are said to be looking to secure the goalkeeper’s signature. Napoli are also interested as they are looking for a replacement for Pepe Reina. The Spaniard left the Serie A runners-up as a free agent and will now join AC Milan.

Jurgen Klopp wants to bring in a new goalkeeper as a replacement for Simon Mignolet. Loris Karius’ display in the Champions League final has seen the Reds signing a keeper as an important business this summer, and Cillessen would likely be first choice. 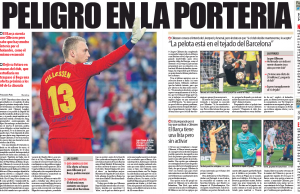 Cillessen’s price tag will not be an issue for Liverpool to match. Having arrived from Ajax for €13m, if Liverpool or any other club decide to offer a good deal and assure Cillessen he’ll be a starter, it will be “difficult” to reject the offer.