Bought from FC Sion with a lot of promise, Edimilson Fernandes never managed to fully break through at West Ham.

Following the arrival of Manuel Pellegrini in the summer, it was made clear to the Switzerland international he might not get the minutes he wanted at London Stadium, and a loan move with an option to buy was set up, sending the 22-year-old to Fiorentina.

Since then, things have been going well for the midfielder, starting 12 of a possible 19 games in the league for the Serie A side, picking up two assists along the way.

However, despite this run of games and a continuous trust from Stefano Pioli in his abilities, it seems unlikely the deal will go beyond this season, as Gazzetta dello Sport state on Wednesday in their transfer round up, saying ‘it’s difficult to see him being bought’ by Fiorentina. 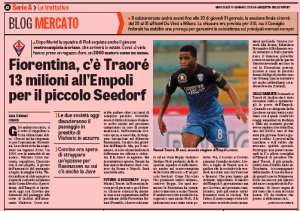 This comes after the Italian club announced on Tuesday they had bought Hamed Junior Traoré from Empoli, loaning the youngster back to his now former club until the end of the season.

The 18-year-old midfielder seems to be their alternative to Fernandes, most likely believing his potential is greater than the West Ham loanee’s.