Manchester United striker Anthony Martial has found himself the subject of criticism after Sevilla’s exit from the Europa League.

The Spanish side were knocked out of their favourite competition last night, with West Ham securing a 2-0 win at the London Stadium to progress to the quarter-finals.

It was a disappointing evening for the Spanish side, who were well beaten by David Moyes’ club on the evening.

Throughout the game, their players were unable to perform to the levels that they have set, and Martial was very much one of them.

He’s currently on loan at the Spanish side from Manchester United, having joined in the January transfer window in search of regular playing time.

He’s not been able to find that, really, with injuries and a lack of form, meaning he’s not been a regular under Julen Lopetegui so far.

Last night’s game was a chance to make a mark, but that didn’t happen, and the Seville based media were not impressed. 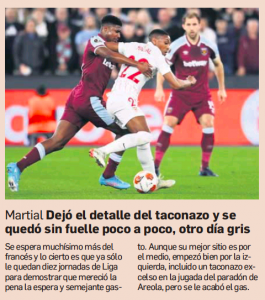 Diario de Sevilla say ‘much more is expected’ of the Frenchman, and the truth is that he only has ten league games left to prove that he was ‘worth the wait and the expense’ Sevilla went to to get him.

They say he started well in the game but ‘ran out of gas’ and was thus unable to make the impact they’d have hoped for.

ABC Sevilla say similar, saying Martial was ‘signed for nights’ like last night, but he simply ‘didn’t show up’ when it came to it. 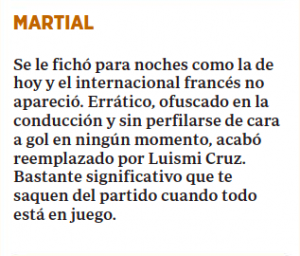 According to them, he was ‘erratic, obfuscated in his driving and not looking in front of goal’ at any time in the 90 minutes.

So disappointing was his performance that he was replaced by Luismi Cruz, something that is ‘quite significant’ given the game and what was at stake.

In conclusion, then, Martial’s winter break from Manchester United is not going to plan, and like their counterparts in Manchester, some are getting a little frustrated.