After Barcelona’s 1-1 draw against Atletico Madrid at the Wanda Metropolitano over the weekend, Jordi Alba admitted that he has not heard from the La Liga winners regarding his contract renewal.

His current deal at the Camp Nou runs down in 2020 and just days after his latest comments on his future, we carried a report from Tuttosport on November 27th, who claimed that Juventus and Manchester City are interested in the left-back.

Journalist Miguel Rico, writing for Mundo Deportivo mentions that they are aware that the Old Lady are chasing the 29-year-old, but the rumour of City’s interest comes as a surprise. Rico says ‘we didn’t have news’ about their interest in the player.

So far, only the Blaugrana’s intent to extend the defender’s contract was discussed as they want to hand him a three year deal.

Mundo mentions that extending his contract will not be easy because Alba was down the pecking order in offering new deals to key players at the club.

This delay will help the fullback demand a better economic package due to his impressive form over the past year. 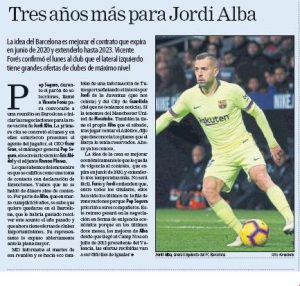 Whether this delay will help Manchester City or any other potential suitor to tempt Alba to leave Barca is something that should be seen.

But it’s always felt like Alba was fishing for a renewal so he’s likely to accept it.