Home Europe ‘The devil showed up’ – Outrage after Manchester City match, with a...
SHARE

The Portuguese media is completely outraged with the refereeing in the Champions League clash between Manchester City and Porto last night.

There’s a consensus that referee Andris Treimanis didn’t have a good match, as he’s blamed for ignoring several fouls on the Portuguese side in decisive plays.

Since there’s a lot being said, we’ll just highlight the words of Portugal’s main sports newspapers and our readers can then have an idea of how angry the local media is.

Newspaper O Jogo brings a front page which says ‘Dragon stepped over’, as a reference to the play where Ikay Gunogan fouled goalkeeper Agustin Marchesin, and ended up with a penalty from Pepe on Raheem Sterling.

Their headline says ‘VAR pushes, and the team only falls later’. They all believe that the play should be checked, and once the foul on the goalkeeper was confirmed, there’d be no penalty. 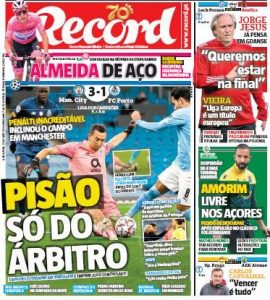 Record has something similar on their cover, saying ‘a stomp only from the referee’, claiming it was an ‘unbelievable penalty’ given to Manchester City. Once again, they don’t deny it was a foul from Pepe, but say their goalkeeper was hit first.

Newspaper A Bola is probably the angriest.

Their headline says ‘It was a beautiful night until the devil showed up’. Their refereeing analyst judged Andris Treimanis’ job and gave him a rating of 2 out of 10.