Portuguese newspaper Record has a story today about the Benfica loanees who can leave the club on a permanent deal this summer.

It’s claimed the Eagles can make up to €20m with these players in the transfer window, depending on how many of them go.

One of these assets is Filip Krovinovic, who was loaned to West Bromwich Albion at the start of the season. The midfielder has made 32 appearances for the Baggies, who now want him on a permanent move.

Record says Benfica are aware of the interest from the Championship side and are set to ‘evaluate the scenario’, since they’re still having second thoughts about letting him go. 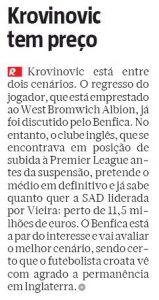 Previous reports this year had already claimed that Benfica were thinking about keeping Krovinovic in the squad for next season.

It’s now said West Brom are already aware of how much they’d have to pay the Eagles for a permanent deal, which is €11.5m.

Something that could help the move is Krovinovic’s wish. Record say the player sees his stay in England with ‘good eyes’, so that may be decisive in the end.