Despite reportedly chasing Jadon Sancho for the vast majority of the transfer window, Manchester United never managed to sign the Englishman.

Instead, they focused their attention on two youngsters, bringing in Facundo Pellistri immediately from Peñarol, while Amad Diallo Traoré was also signed for a fee that could reach €40m from Atalanta, but the Ivorian won’t arrive until January.

The decision to spend that much money on an 18-year-old isn’t one United appear to have taken lightly, with the Serie A side’s president, Antonio Percassi, revealing what took place behind the scenes between the two clubs.

Speaking to L’Eco di Bergamo in a lengthy interview, the 67-year-old broke down the negotiations and told his team’s fans how the youngster was sold for so much money.

He said: “The negotiation with Manchester lasted almost a year. The details and the scenarios are crazy. Meeting after meeting we learned unimaginable things. This leads to the growth of the club and enriches the work of everyone, from the general manager, Umberto Marino, to the entire staff.”

Percassi then revealed exactly when Ed Woodward and co. made first contact.

He said: “A few days after the Youth League game against Manchester City, the other Manchester contacted us. They had followed him, the real negotiation started. We went twice to England. The text of the final agreement is a contractual masterpiece. 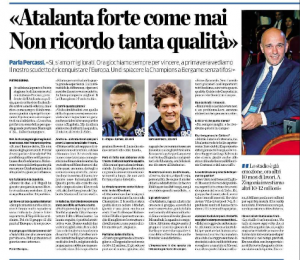 “The professionals involved in the operation are of a high level. In terms of negotiations, we have learned a lot. And it is above all thanks to Luca’s work that we arrived at the final figures.”

The ‘Luca’ referred to by Percassi there is likely his son, Gianluca Percassi, who so happens to be Atalanta’s CEO.

As for the offer itself, the club president said: “It was an operation we couldn’t refuse. If the boy becomes great, we will have recognition for a long time. If he’s not lucky, we’re protected.”