Home Europe Man United ‘has made Upamecano dream since he was a kid’ –...
SHARE

Now one of the most promising centre-backs in the Bundesliga and unlikely to be far off from a France cap in the future, Dayot Upamecano is a guaranteed profit for RB Leipzig when they decide to sell him.

Transfer rumours sending him to Manchester United have circulated recently, and their interest in the centre-back dates back to his time at Valenciennes, when they came extremely close to signing him.

The failed transfer was well documented at the time, with certain members of the press going as far as saying it was a done deal. 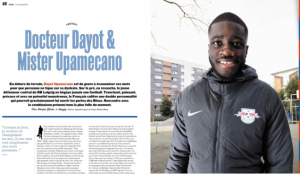 According to So Foot, who asked the player’s agent, the player was ready to sign with the Red Devils, ‘the club that has made Upamecano dream since he was a kid’, no matter what, but his entourage ultimately pulled the plug.

Thierry Martinez said: “An intermediary met with us, but between the project she presented us and what was actually going to happen… A flat was promised, but that changed to a host family with only six return trips for his parents.

“When you uproot a player at such a young age, that isn’t enough. I wanted Dayot to have a stable emotional balance off the pitch.”

Clubs like Arsenal, Rennes, Marseille and even Bayern Munich then came knocking, but the decision to go to Salzburg all came down to a PowerPoint presentation, shown to the family, where everything was planned for the youngster, from accommodation to education.

That’s how they reassured everyone and ultimately won the race.

Actually, a director of football would be a good start.