After a summer of back and forth, Tottenham finally appear to be on the verge of signing Giovani Lo Celso from Real Betis.

The two clubs have been negotiating over the Argentine midfielder all summer, but it has taken the final day of the transfer window for serious movement to happen.

The move is widely covered in Spain, as you would predict, with the Sevillian media providing all the details on the potential move.

ABC Sevilla report that Lo Celso will initially join Spurs on loan next season after the two clubs failed to find a deal for a permanent transfer. That loan includes a purchase option, which Tottenham can activate at any point during the campaign. 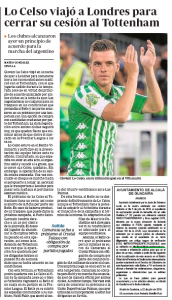 Diario de Sevilla add more detail to this, saying Lo Celso’s desire to move to Tottenham because of the finances on offer, is what has ultimately made the deal happen.

They offer extended details on the finances of the move and say Tottenham will pay a fixed price of €49, which comprises of €15m for his loan this coming season and €34m next season.

Betis are also reserving a percentage of his rights, which will then take the deal close to the €60m Betis want.

Mundo Deportivo explain this a little further, saying Spurs will pay €16m for the initial loan and then purchase option for €41m will get them 80% of the player. That option is only compulsory if Spurs qualify for the Champions League, though.

They can then buy the further 20% of the player that Betis are retaining if a set of variables are met. There’s no explanation of what those variables are at this point.

The newspaper backs up the claims that the finances make sense for Lo Celso, saying he will €8m a year before tax, and that the player has even waived his right to €3.5m from Betis to push through the move.

All the sources say there are still minor issues to tie up before a deal can be done, but with Lo Celso already having travelled to London for his medical and an agreement in place, it seems this long-running saga will be completed on deadline day. 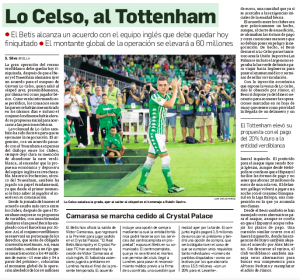